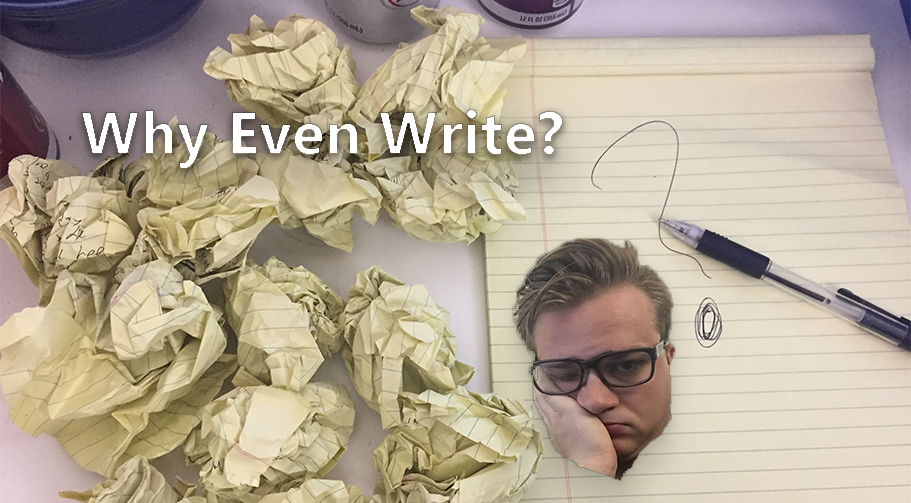 A few weeks back (way longer than I wanted to take for this, sorry about that) I got a message from some family responding to another blog post: Fiji to Provo. (Gah I still hate that title)

I don’t think they’d have any problem with me using their name in here but I didn’t check with them so I’ll just play it safe. Their response started a lot like several other responses I got, they thanked me for sharing my story, let me know that they cared and supported me, all that stuff.

After that, they asked some questions. Big questions that are tough to answer. I like these questions though, I tend to be a pretty heady person so having big questions I can mull over in my mind for long periods of time is actually a lot of fun.  Today I’d like to start responding to some of those questions. The first of them is probably the easiest, “Do you know why you started blogging? Or reviewing movies?”

I do know why I started blogging when I first started doing it in late high school and just after graduating it was honestly out of arrogance. I really believed that for some absurd reason that what I had to say was just so important that I needed a platform to do so. I also had a compulsive need to write/create and blogging was the easiest outlet for that. As time went on and my life experiences humbled me (to say the least) the reasons for writing changed. It stopped being about thinking my opinions were better than others and therefore deserved a platform and an audience, but more about being an outlet for my struggles, and a way to achieve some sort of satisfaction in my life because good lord was I not finding that in any other area of life.

This naturally led to me talking more and more about movies because as life continued to pound me into the ground I retreated more and more into the stories of film. I couldn’t find love to save my life, but I could watch a romantic-comedy and feel some semblance of the happiness those characters were feeling. So I just watched more and more movies and just like anything in life as you do it more and more your perception starts to shift. I started building a tolerance like someone learning to hold their liquor. The same basic movies that had previously kept me perfectly entertained were no longer able to do so, little problems with a performance that most folks would totally overlook became glaring errors because I had seen lots of other people get it right. Then I would talk to people about these movies and become frustrated about how they just weren’t seeing what I had been seeing, so much so that I thought I needed to start using blogging as a way to fully explain my position on movies. What I quickly learned when I first started reviewing movies is that I had neither the expertise or vocabulary to even begin giving useful criticism of the film. I have some of it now, but I always feel a little vulnerable that someone with real knowledge might come along and explain in detail just how wrong I am though. Although I think I’d enjoy that just for the wealth of knowledge it would expose me to.

Beyond talking about movies though I really felt my writing kind of “stall out” so to say. It always felt like I was just going in circles talking about the same things over and over and never really having anything new to say.  That was until I discovered what is the current goal of blogging for me. To achieve transparency in my life. The goal now is not to arrogantly flaunt my opinion, but rather to simply explore the question of “what does it mean to be Jonny Tollestrup?” (GAH that sounds so cliche and pretentious doesn’t it? oh well like I care.) Fiji to Provo was the first in what I hope to be a series of steps that actually achieves that goal. I also hope that I can find a way to use movie reviews to answer that question as well. How a person reacts to the stories we’re told says an awful lot about who we are and so when I talk about movies I want to now try to totally avoid trying to be objective about the film. It’s a silly thing to pursue anyway, we can never fully divide ourselves from our subjective interpretation so why not lean into it?

Okay, that actually kind of went ok, I guess that means I can keep going through these questions and trying to answer them as best I can. Also, I just wanna throw this idea out there for the like 2 people that actually read to the end of my blogs, it’s been a while since I talked about dating and gave some of my more out there theories on the subject. Perhaps it’s time to go into that again? I actually think I have new stuff to say now beyond, “holy crap I suck at this.” so that might be neat. Later

One thought on “Why Even Write?”